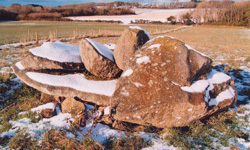 In a windswept corner of the Frying Pan Field on the Pendarves Estate in West Cornwall (TR14 9LR, SW6501437213), sat a neglected pile of stones known as Carwynnen Quoit.

With 5,000 years of history, the cromlech has some tales to tell, and even more to inspire.  The five acre site was purchased in 2009 by The Sustainable Trust with help from the Heritage Lottery Fund and our partners.  Events were held to celebrate, and an art exhibition 'A Giant Leap' with free workshops was held in an empty shop in Camborne. We are now delivering a community project around the restoration of the monument.

In the longer term this will include exploring ancient farming methods and ways of life on the land using the restored quoit as a focus. It has been described as 'A Monument Like No Other' by our greatest living Cornishman Charles Thomas CBE  DL Dlitt FBA FSA.

Fundraising has been successful for the archaeological excavations and restoration phases of the project. A preliminary investigative dig was held in July 2012. Some interesting neolithic finds were made along with more contemporary artefacts.

The Big Dig, a more detailed investigation, started in mid September 2012 and provided a unique community opportunity to excavate this Penwith chamber tomb and inform us about its original construction. More fundraising bids have been successful and the iconic Krommlegh Garwynnon  (Cornish) is now being restored for the people of Cornwall.

The site inspires creativity. Novelist Ann Treneer wrote in Up Troon 'On the moor or standing under the great coping of Carwynnen, personality is dwarfed and petty problems melted away.' And 'Because it is in a field, Carwynnen, notwithstanding its powerful upright and grand coping stone, is a little subdued, a little domesticated, a little as though put in a cage to be a specimen, patronised by Pendarves. I used to wonder whether, in a home field, it felt like a Red Indian in an urban villa.'

The restoration education and outreach includes a second film, a downloadable application, the composition and performance of a ballad, an education week in the field, experimental archaeology workshops and a commemorative book.

RT @Nickuae: A reminder that the report that inspired todays #museumhour can be downloaded (free) here https://t.co/o5TwkFgWpr https://t.co…

RT @CaradocPeters: My fave most interesting item from this #InternationalWomensDay just past is this from the @britishmuseum https://t.co/R…

RT @edenflorilegium: In Cornish, hear about a summary of the @giantsquoit project. Thanks Matt (@maga) https://t.co/L0HVAfvdnt

https://t.co/INHhMwglBE is where you now find the @giantsquoit web app. Lots of development opportunities, explore… https://t.co/50vxHX50pc

RT @Ecogeographers: You can still get hold of this booklet about the @giantsquoit from https://t.co/7F0orZ1rpA, full contact details listed…